Banned from Wikipedia, the free encyclopedia

Lightweight rail is railway adapted to the weight of extra light goods to be transported. A high-speed train is for passengers, implying only 6-8 tonnes/wagon, and yet the traditional railway concept for at least 100 tonnes/wagon is normally used. Lightweight rail implies designing the train on the basis of this low required weight and trying to exploit the benefits then obtainable.

The term Lightweight rail should not be confused with the common term light rail, which only partly implies low weight, but primarily implies the ability to merge with city traffic, in contrast to heavy rail, which requires a separate right-of-way. Light rail has only partly explored the potentials of low weight, but enough to be able to negotiate the grades in sloping cities and other terrains it has to adapt to.

Can trains be light?

The minimum weight for trains running on the ground was demonstrated in February 2007 when a train was derailed by snow masses on a Norwegian mountain line. The train — called a Signature train — consisted of motorized wagons, each with 72 seats and weighing 54 tonnes. A local train expert told the media that he had warned against using such a light train, as it could slide like a snowboard and derail. A heavier locomotive, which could push an efficient snow plow, should be used in front.

In warmer climates, where snow masses may be disregarded, trains must still be built to survive collisions with cattle and other large animals, as well as crossing road vehicles. If the track were lifted 4-5 meters above the ground, resting on pillars, both snow mass disturbance and collision danger would be virtually eliminated, so now lightweight technology could be employed. A positive feedback is encountered here: Rail elevation enables light trains, and light trains are easy to elevate above the ground. Such positive feedback situations can create quantum leaps in technology, and this effect seems to be effective here.

An empty lightweight wagon for 70 passengers could weigh only 5 tonnes, against 40 tonnes for the railway wagon. If the total weight is used, with motorized bogies, it becomes 6.4 tonnes, but this weight can be compared with a 40-tonne wagon among 6-7 such wagons pulled by an 80-tonne locomotive. In both cases the beamway train has only 1/8 of the weight. The 70 passengers in the railway train have a 25 meter long wagon, while the 70 in the beamway train have 16-18 meters, so it may be more correct to use the ratio 1/6. If the weight of the passengers equals the weight of a light wagon, the ratio becomes 2/7.

The strongest forces at the safe altitudes would be those from the wind and the passengers. Special circumstances like unusual transport or construction activities could impose obstacles, but they are easy to detect (by ultrasound echo or radar) and require no recognition capability — just automatic braking. This simplification of the environment makes it possible to use driverless and computer-controlled trains. Another advantage of the elevated track is that the power line can easily be built into it, without being a danger for people or animals, and without being disturbed by rain or snow.

The advantages of reduced weight become evident in three areas:

A conventional railway track is so wide that the train can easily balance on top of it, and this works fine on a flat surface. But when the track is to be elevated on top of pillars, it should be designed like a stiff beam. This means: It should be thick vertically, but narrow. A wide beam will be heavy, expensive, and often annoyingly overshadowing. The train should not try to balance on top of a wide beam, but achieve stability by wrapping partly around the upper part of a narrower beam. We now have a straddling monorail, also called the Alweg type train.

The train itself can be lightweight, but the track — normally a concrete beam resting on concrete pillars — has some problems:

So we let the train hang under a steel beam, and now we have a suspended monorail, also called a SAFEGE-type monorail, or a beamway.

Steel beams held up by metal poles give a lightweight track — at least in terms of volume and visual disturbance, and when the poles can be 30-40 meters apart, the train can act as a tram or bus in a dense city. It can follow a road just above it — also on bridges — and may get a quite straight route even if the road curves somewhat back and forth — by taking shortcuts over sidewalks, fences, gardens etc.. It may not seem plausible that real trains can run on long and not very stiff beams, but a long train will have much of its weight in the strong track parts near poles, and the train parts in the weak beam parts midway between poles, need not strain seriously if the train has some stiffness — preferably a dynamically adjustable one. 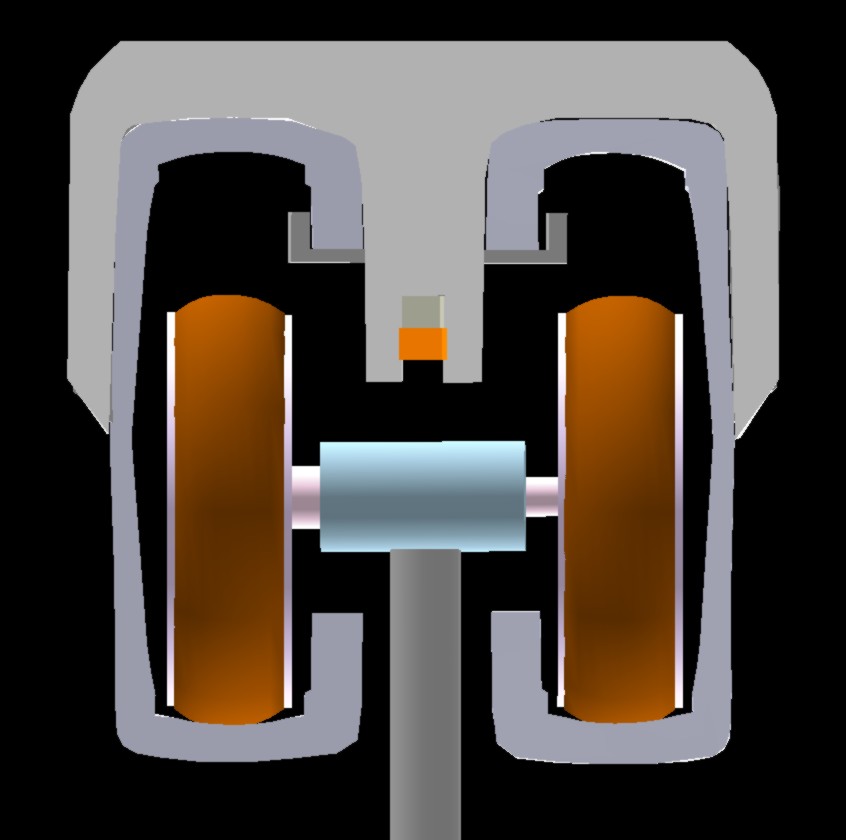 Cross section of a beamway beam. The power rail (orange in the middle) is mounted in plastic.

A beamway's bogies run inside the hollow beam, so the wheels always have a dry and clean path. The exposed environment of the straddling train, on the other hand, can collect some snow — enough to prevent high-speed operation. And such a top surface is likely to invite birds for a rest with a view — and a massacre.

(A third suspension alternative is to let the train ride on the side of a tall beam which can carry trains on both sides, but then it will be difficult to avoid heavy loadings of the wheels — which should not be small if high speed is wanted.[1][2]) In addition to the wheels inside the beam, wheels can roll under the bottom of the beam. If the two sets of wheels are pressed together, hillclimbing abilities are greatly improved. Brakes which likewise pinch the bottom of the beam, will be far more efficient than traditional wheel brakes. When the track is a relatively compact beam, it becomes possible to move it in various ways: 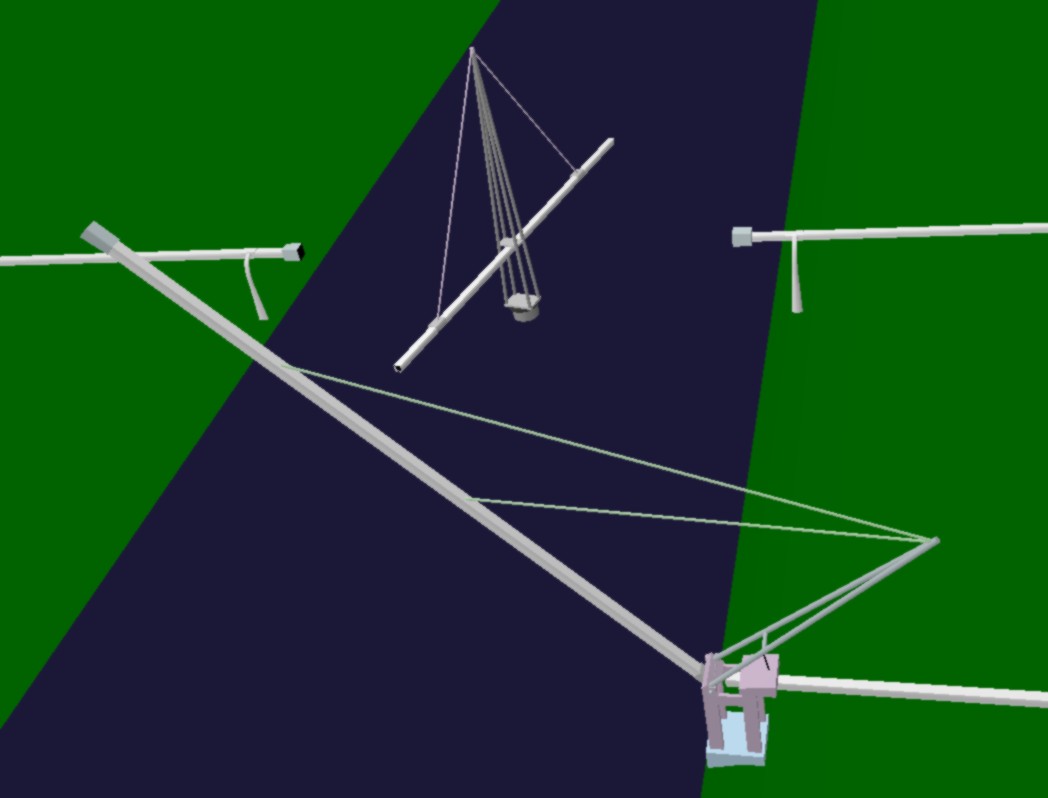 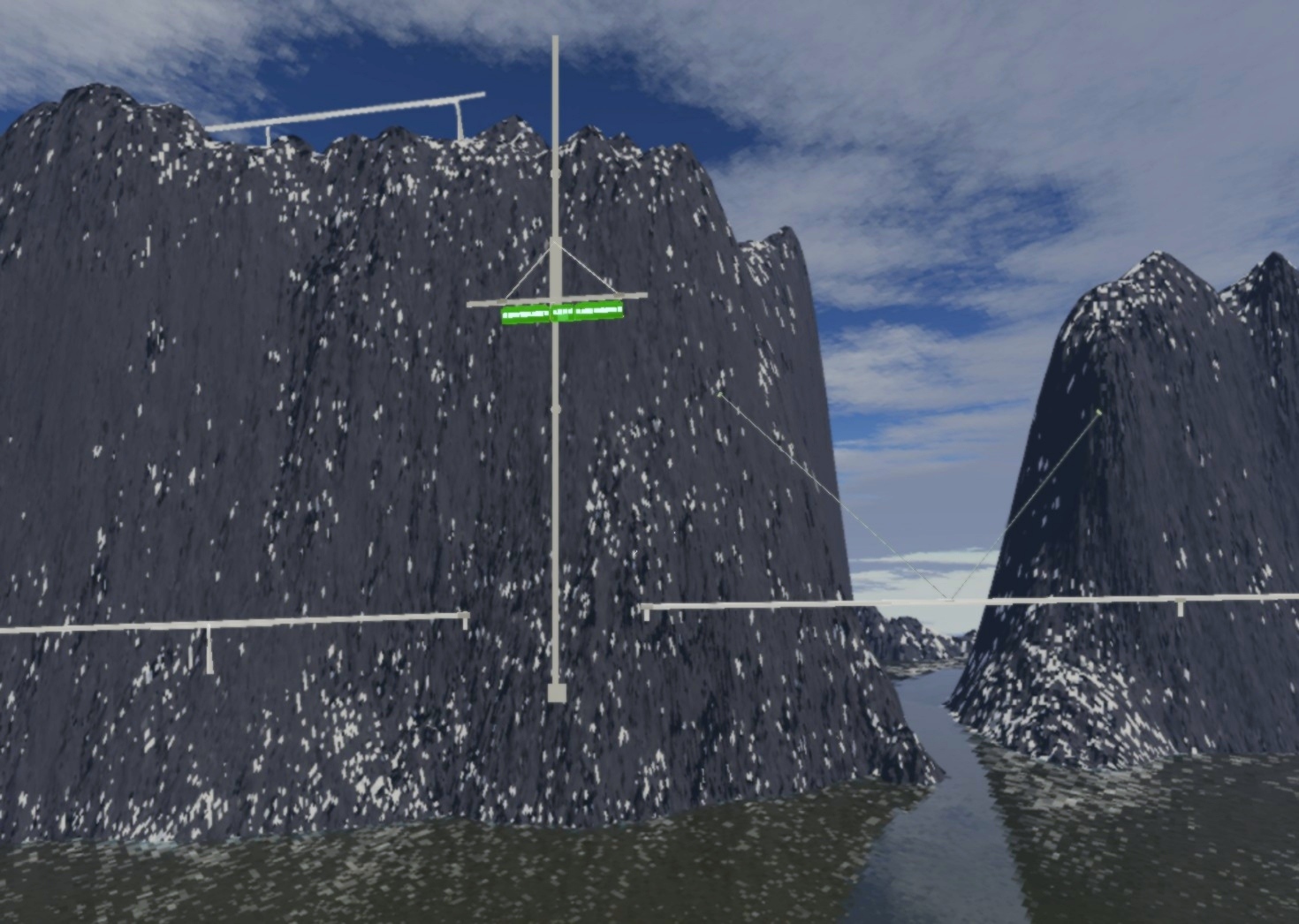 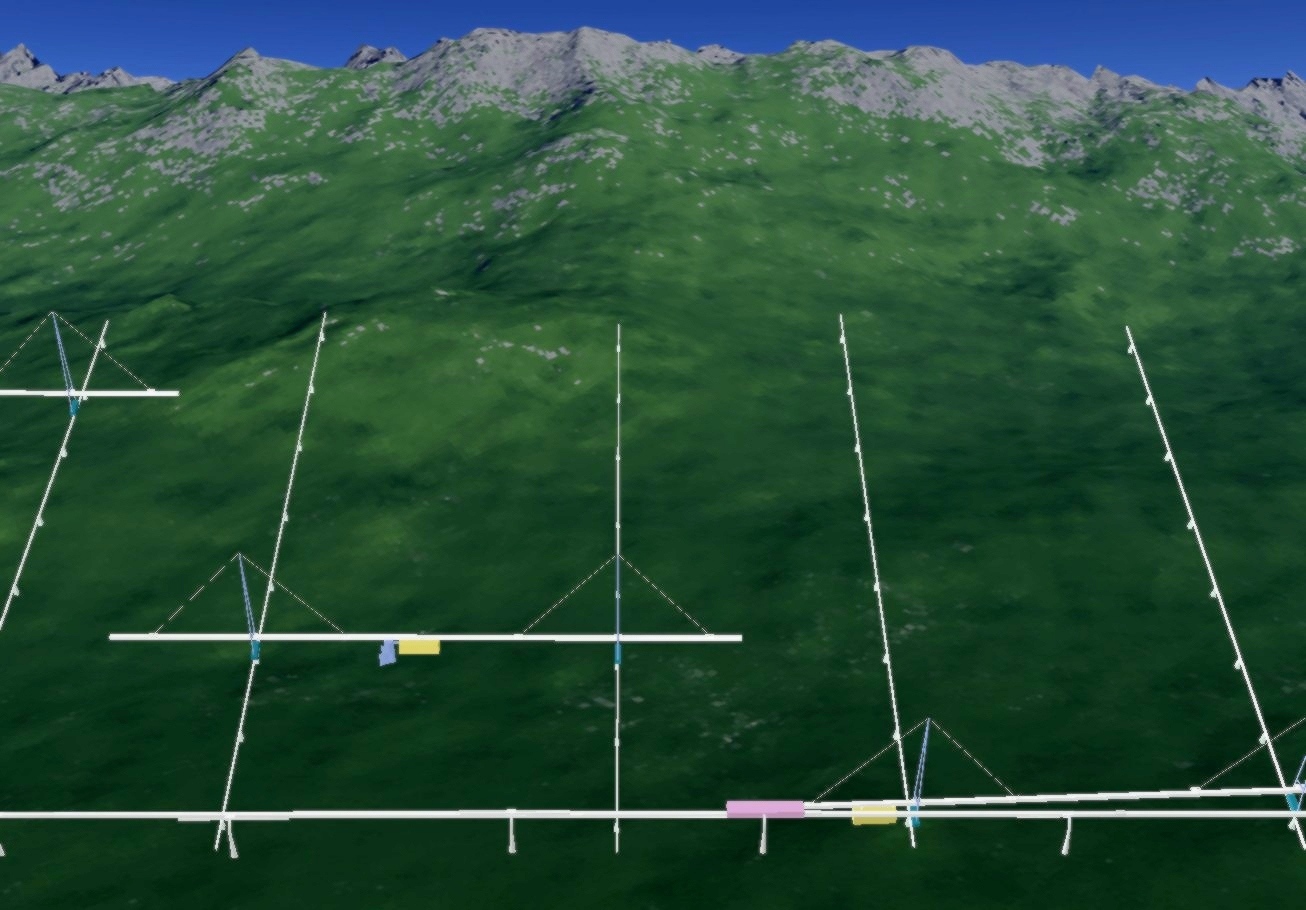 When the passenger cabin is light, it becomes feasible to make it detachable, so that it can be transferred to other transport systems. This gives potentials for the many flexibility advantages long reaped by container transport of cargo. But passenger cabin transfers must be fast, and without experiences of dangling under cranes. The beamway has unique potentials in this respect, because its beam can lead to a position very close above other vehicles/platforms, such as a boat deck, a flat freight wagon on conventional railway, or a trailer-like bus. Only centimeters/inches of lowering will be required for transferring the cabin to the recipient, so this would hardly give the passengers any experience of dangling under a crane.[3]

A cabin transferred to a boat

When the weight is low, it is much easier to replace those awkward wheels with advanced levitation technology like magnetic levitation — maglev. Its use in a beamway beam is also simplified by factors like:

The beam tolerates little loading by levitation mechanisms along the track, but the passive coils used by the Inductrack system may be light enough. The interior of the beam also facilitates another stable levitation method: Windsurfing, either by Hovercraft-style air pumps, or simply by sliding passively on the air cushion obtained under airfoils after rolling on wheels up to a high enough speed. When there is no contact between wheels and the beam, conventional motors can't be used, and must be replaced by alternative propulsion — probably the linear motor, which may be integrated in the maglev mechanism. [4] 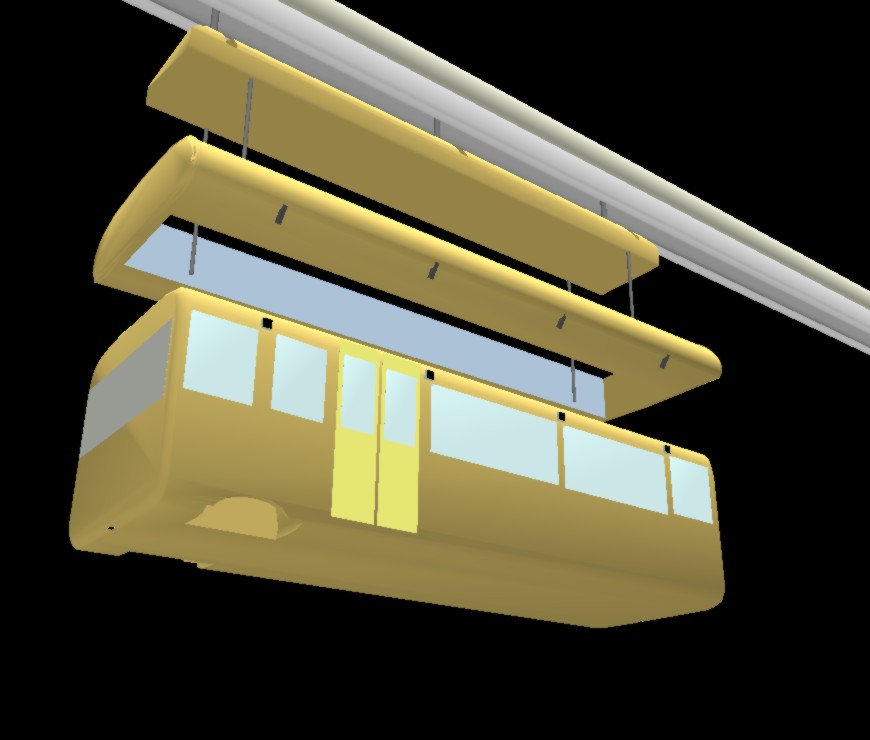 A cabin for bus use

For moving large pieces of cargo, these lightweight railways (without alternative heavyweight transport nearby) would be unsatisfactory. But for moving people and light cargo, a bidirectional beamway line could have less than one minute between trains, if it were not for the irregularity introduced at stops. If heavyweight railway entails having to do with single-track operation instead of double-track, the long train intervals make competition with a stream of light trains impossible — particularly if factors like the user-friendliness of short departure intervals, and the capacity decrease caused by a disabled train, are taken into account. Driverless lightweight trains may be less personnel-demanding — particularly if ticketing and security permit trains to be fully unmanned like elevators.